Recently I helped a friend at a major gay Pride event. Did you know that if you identify as a gay or bisexual male in the good ol’ US of A, you must have had no sex for the preceding three months in order to donate blood? And did you know that the same rule does not apply to straight men? It’s true. So at the aforementioned Pride event, I was handing out flyers to recruit guys to enroll in a study whose aim is to change the policy for blood donation for “men who have sex with men” (yes, that’s the way health science researchers refer to us :).

Anyway, it took me about half an hour, or about ten encounters, until I refined my approach to successfully get a guy or group of guys to stop—or at least slow down—so I could sputter my twenty-second spiel before shoving a flyer in their hands. However, there remained one particular type of guy who remained curiously aloof.

The more a guy was super fit and handsome, the more likely he would dismiss me with a raised hand, tight smile, and “no thanks.” This emerging revelation was one that I was not eager to accept. So rather than avoid the prettiest boys, I redoubled my effort. I hoped some of them would prove me wrong.

As the tally of rejections mounted, I wondered: are these guys so relentlessly pursued that they develop a reflexive dismissal of any strangers’ approach? Mind you, I can appreciate getting annoyed by another guy who won’t take a hint at a bar, but the Pride event was hardly that.

Just when I was about to give up hope, along came “Green Shorts.” As I didn’t get a name (I wish), I am referring to the shirtless Adonis by the retro green nylon running shorts he wore with the same effect as Stephanos Tsitsipas (tennis pro—if you haven’t seen him from behind, Google it; thank me, later.) Anyway, Green Shorts not only stopped and listened, but he took a stack of flyers and for the next hour helped me pass them out. And yes, the equally hot guys had become suddenly interested in hearing about the study.

So, where does this all lead? What’s my point? It’s this: our little, loving LGBTQ+ community is already small enough, challenged enough without some of us—for whatever reason—thinking they deserve a pass at paying attention to issues that impact our equal treatment and our pursuit of healthy, safe, and happy lives. We’re in this together, guys! So thank you, Green Shorts, whoever you are for stopping, listening, and stepping up! You are a role model among models. And if you haven’t read my blog before, I’m single … just saying 😊

Guys, if you’re between 18 and 39 and are interested in joining the study, get all the details here: https://advancestudy.org/

Till next time, I’m Hayden

And remember, if you can’t be good, be safe! 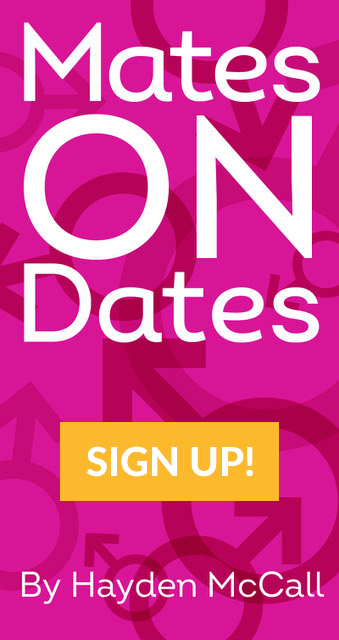 Get the latest MATES ON DATES and other author fun.

Dating can be fun, thrilling, a waste of time, or a smoldering car crash. At Mates on Dates, I’ll share my experiences dog paddling the occasionally hot,  sometimes cold, and mostly lukewarm waters of gay dating.
– Hayden McCall